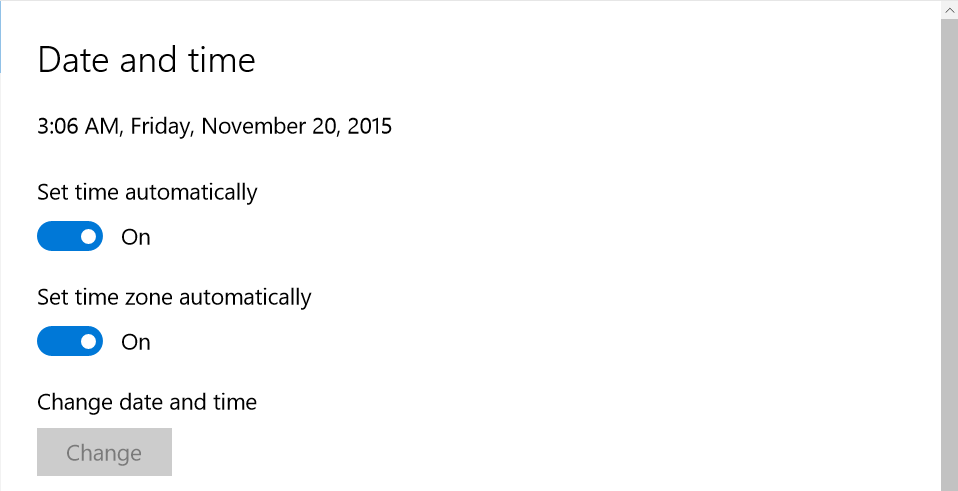 This is a bit off topic for my blog, but none the less I want to put it out there.

I have a Surface Pro 3 and I put Windows 10 on it when RTM was released. It is my personal opinion that that build of Windows 10 has been the best build and the quality Windows 10 has been going down hill since then. Sure there could be something wrong with my Surface, but given what I am about to show below, I do not understand how that would be a hardware problem.

Lets start with the time issues. Multiple times I have tweeted that my system clock was woefully wrong. Example: I can guarantee you I was not awake at 3:00 am to take this screenshot. I have woken up to this at least ten times since getting on Windows 10, its happened on every build. When the problem first started, toggling “set time automatically” would not fix the issue, and I would have to manually do it. Now, toggling it will reset the time, that’s an improvement.

The problem appears to be related to the Surface not going to sleep and just staying on draining the battery. Here are my power settings: As you can see whether I am on battery or power, the Surface should go to sleep at some point. However, this happens multiple times a week, where I come back to my surface to find its battery completely drained and it won’t turn on.

Lets move on to Edge. I am a Firefox guy, or lets say, I was. When I first got on Windows 10 RTM, Edge was awesome, amazingly fast, responsive and never froze, despite how many tabs I have open. I am a tab hoarder, I freely admit this, as I write this I currently have 13 tabs open, which is not a lot for me. However, despite that, and despite the fact that done enough bing.com searches to reach 500

on the medal system, I have exactly zero items in my history. Puzzling to say the least. This screenshot is from a few weeks ago, I still have no history in my Edge browser.

I have also seen Edge using 50-75% of CPU with two tabs open, just regular websites without streaming video or anything like that.

Another fantastic problem is that I have Edge set to open all the tabs I had previously open, this works, except for if you open any PDF or other document that opens in Edge, it will lose all the tabs you had open, this is especially annoying when you have no history to go back on.


Maybe I need to do a complete re-install of Windows, or maybe something is wrong with my Surface, I’m not sure, but these problems are annoying to say the least. With each progressive build my experience has gotten worse. I would really like to not have to do a full restore of Windows as I have a lot of apps like Lightroom, Photoshop, and Adobe Bridge setup just how I like them. And wasn’t that the whole point of Windows 10 anyway? Being able to migrate installed applications without having to re-install them on the new build? To be fair this process is amazing, I was pleasantly surprised when Lightroom successfully migrated from Windows 8.1 to Windows 10 on my Surface.